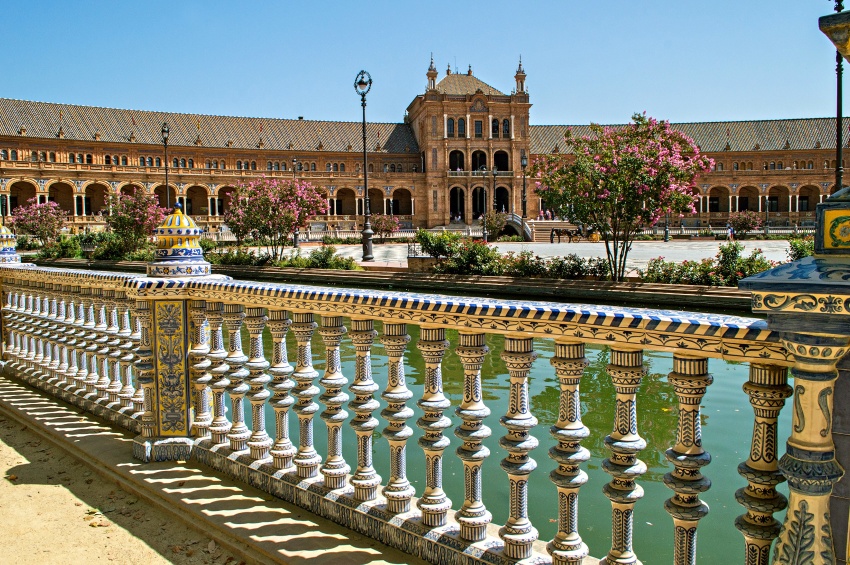 From 115 AUD
Previous Next

Seville and the Alcazar Palace

Transfer by coach to Seville. We'll start off our visit with the azulejos that adorn the Plaza de España which was constructed for the Ibero-American Exposition of 1929. The 200 meter diametered hemicycle symbolizes Spain welcoming its former colonies. It faces in the direction of Guadalquivir and represents the path to the Atlantic Ocean and America. There is only one building going all along its rounded side. A fountain designed by Vicente Traver, a Valencian architect, stands in the center. Also lying between the center and the palace are four bridges spanning four canals in half circles, representing the four former Spanish Queens. We'll move on with a stroll through the typically Sevillian courtyards garnished with flowers in the charming Santa Cruz district. Sheltered behind the former perimeter wall, what used to be the jewish district belongs to the historic heart of the city and is surrounded by the most famous buildings of the Andalusian capital. The district, which dates back to the Middle Ages, is a center of art and history that brims with legends, churches and palaces, witnesses to its past. It was greatly enhanced at the beginning of the 20th century and stands today as one of the most emblematic quarters of Seville. It's mostly reputed for its enchanting steep alleys and shaded squares. Afterwards, we'll discover the Alcazar, one of the oldest Royal Palaces in Europe and the King's residence. A Moorish house and a fortress, the Alcazaba (former Arab district) is a gorgeous testimony to the mudéjar style with a combination of Moorish techniques and Christian symbols. The visit will end with Seville's cathedral, providing one of the last testimonies to the Gothic style. This structure was built over the ruins of an Almohad mosque as a symbol of the capital's prosperous status of great commercial town after the Reconquista. We'll return on board at the end of the morning.